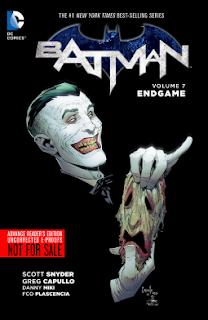 Building on what Grant Morrison established with the Joker, Scott Snyder has him return as a different version of the character with each appearance.  This time, he is serious about killing Batman.  Snyder continues to come up with creative ways for the Joker to attack Batman.  As Batman hunts for him, it is revealed that his nemesis has been in Gotham since the founding of the city.  Is he actually immortal?  If so, is Batman doomed to lose in the end?  The tension mounts in one of Snyder's best stories to date.

Highly recommended but you will want to read this series from the start to get the full effect of the story.
Posted by Jim Black at 8:52 PM