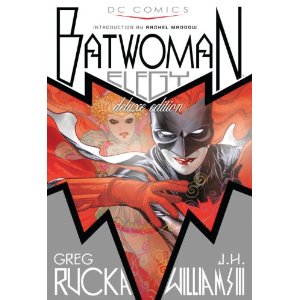 From Goodreads...
A new era begins as Batwoman is unleashed on Gotham City! Marked by the blood-red bat emblem, Kate Kane is a soldier fighting her own private war - one that began years ago and haunts her every waking moment. In this first tale, Batwoman battles a madwoman known only as Alice, inspired by Alice in Wonderland, who sees her life as a fairy tale and everyone around her as expendable extras! Batwoman must stop Alice from unleashing a toxic death cloud over all of Gotham City -- but Alice has more up her sleeve than just poison, and Batwoman's life will never ever be the same again. Also, witness the origin of Batwoman in the shocking and tragic story "Go," in which young Kate Kane and her family are kidnapped by terrorists, and Kate's life - and the lives of her family - will never be the same!

Sometimes a series happens that you hear a lot of good press about but, for one reason or another, never read until later.  This is such a series.
Greg Rucka is at the top of his game with this book.  He is one of the best at writing street level characters.  As Rucka reveals Kate's background, it is believable.  Her training in the military and the support of her father helps to give us a rich, fully realized character.  And the anatagonist of the series, Alice, is a perfect foil for Batwoman.  Rucka obviously put a lot of thought and planning in the development of this series.
Batwoman is a showcase of J. H. Williams' innovative layouts and panel designs.  The bat motif is in the design of many pages.  The non-standard panel designs help to pull the reader into the story.  It is almost like the character Alice has influenced the thoughts of the artist.  If Williams ever goes to Marvel Comics, I would hope they would bring back the old "Master of Kung Fu" series.  His layouts are similar to the work done by Paul Gulacy and Gene Day on that series.
The Rucka/Williams team was perfect on this title.  I hope that Williams is able to continue the quality in the new series.  Rucka has left for Marvel so he will not be scripting it.
Highly recommended.
Posted by Jim Black at 11:04 AM